Chapter IX - The Winds of Change

The Reverend Durnford’s official farewell marked not only the end of an era but also the beginning of significant changes for the parish life of St. Anne’s.

Changes blew in with the person of John William French, an energetic 30-year-old theology student from Huron College. On April 12, 1942 – just one week after Durnford’s farewell – French officiated at the 11 o’clock service. He signed in as “student-in-charge” in the parish Preachers Book. Following the service, this plucky young man presided over a Special Vestry Meeting.

It was a time when St. Anne’s, Byron, was still part of a three-point parish along with Trinity Church, Lambeth, and Church of the Hosannas, Hyde Park. The vestry meeting was called due to a request from the Lambeth church for a change in their Sunday service time.

The faithful folk of Trinity Church had worshipped at three o’clock in the afternoon for nearly 80 years. They sought a morning service.

St. Anne’s members, being content with their 11 a.m. service, sympathized with Trinity in a guarded sort of way. Vestry passed a motion made by W. P. (Percy) Simpson, seconded by M. A. Sabine, “that the wardens be empowered to change the time of morning service, if necessary, to meet the requirements of the members of Trinity Church, Lambeth.” (from vestry minutes)

Grace Hertel suggested that St. Anne’s send a message to the Lambeth congregation “expressing our willingness to co-operate with them in every way possible.” (minutes)

The following Sunday Trinity got its morning service – at 9:30 a.m. St. Anne’s cruised along with 11 a.m. worship for another eight months. Hosanna’s Sunday service stayed at 7:30 p.m.

French’s able and friendly debut at St. Anne’s was the start of a multi-faceted growth spurt in the parish.

Born in Woking, Surrey, England, in June, 1911, John W. French received early schooling at the Church of England School in Whitley. While still young, he moved with his family to Canada, settling in Windsor, Ontario. Later he attended O’Neil business college, there. In 1934, he married Ena Evelyn Millican. Another move took French and his wife to Chicago where he attended McKinley Roosevelt University, graduating with a B.A, in 1941. He promptly applied for admission to theology studies at Huron College, London, and entered the three-year program in September.

These were uncertain times. French would be pastoring much sooner than he might have expected.

Effects of the Second World War had reached most sectors of Canadian life by then. The church, for example, was experiencing a severe shortage of clergy. Much like a worldwide pandemic, worldwide war compelled all of society to adapt and change to a new reality.

According to Rev. Canon Dr. Doug Leighton, an associate professor of history at Huron University College, “Many clergy volunteered for overseas service [during the war]. Finding interim priests for them was difficult enough. The human resources of the diocese were stretched to the limit.”

In appointing John French, a first-year theology student, to the three-point parish, the bishop [Charles Seager] would have taken into account that French was “mature” (age 30) and “stable” (married), Leighton pointed out.

The plan was for French to continue his theology studies while working part time in the parish communities. This, in turn, would require parishioners to take on more responsibilities in the churches.

The congregations must have agreed to oblige. They certainly pitched in.

French was ordained deacon by Bishop Seager on May 31, 1942. The next day, the Rev. French and his wife, Ena, moved into the rectory at Hyde Park. Hence the 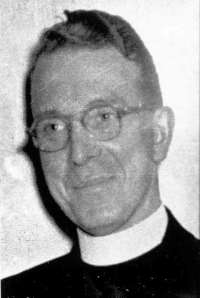 “student-in-charge” became the “incumbent.” He was ordained to the priesthood on Sept.19,1943.

At St. Anne’s, French introduced changes and new appointments gradually and often step by step. One of his first appointments would have been that of a new Sunday School Superintendent. The position had been vacated by Rev. Durnford himself. French chose Kathleen (Kae) Hart for the job.

Kae was a lifelong member of St Anne’s who had been a Sunday School teacher for seven years. She enjoyed the children, particularly her class of mischievous boys. With her experience, dedication, enthusiasm and willingness to serve, Kae was the ideal choice. Indeed, the Sunday School flourished under her leadership.

In the early 1940s, Sunday School gathered at 10 a.m. before the morning church service. Since a separate parish hall had not yet been constructed, children and teachers met in the church and in the large West Wing parish room. This was also before church offices were installed in the area. There was enough space for several Sunday School classes in the parish room. Moveable room dividers were used to divide the children into age and gender groups for lessons and Bible Stories.

Sunday School enrolment in 1941 “was down to 18 pupils and two teachers,” Kae said. But growth soon picked up and spiked after the war ended, due in part to the baby boom.

“We always had an opening hymn,” Kae went on. Music was provided by the Sunday School organist playing on an old organ. Later, violins were added. Her Sunday School “staff,” as Kae called them, were all parishioners glad to come to church early to contribute to the Sunday School.

By 1953, St. Anne’s Sunday School had skyrocketed to 110 pupils, nine teachers and six other officers. Although this may be explained partly by the changing demographic, a great deal of credit must go the outstanding leadership of the Superintendent.

In her later years, when asked to describe what John French was like, Kae (Hart) Ellis replied: “He was redheaded, very nice, and a lot of fun.” With all the appointments that followed hers, the church was soon a-buzz with cheerful, albeit meaningful, activity.

First Board of Management

At the annual vestry meeting January 27, 1943, St. Anne’s formed a Board of Management for the first time. The rector named Frances Hart, Bebe McEwan and John Meriam to the board. Taking nominations from the floor, vestry elected Kate Chapman, Muriel Foyston and Archie Kains to be on the board as well. Board members would hold their positions for one year and would meet monthly starting in February.

Vestry also established a rectory committee of two, naming Grace Hertel and Anne Simpson to keep track of any needs or improvements required at the rectory. As for the wardens, French appointed W. P. Simpson to be rector’s warden and the long-serving people’s warden, Thomas Sulston, was reelected for another term. In March, the Board of Management decided to inaugurate the duplex envelope system for offerings. They ordered 20 boxes for the year and Frances Hart agreed to become envelope secretary.

But the subject of changing back to 11:30 was raised again in July while W. P. Simpson was presiding over a Board of Management meeting.

Simpson asked the board “if we were willing to change [our] service time to 11:30 to meet needs of Lambeth who felt [their] church attendance had dropped since they had had to revert to 9:30 services.

St. Anne’s once again received a short reprieve. The 11:30 a.m. service time did not come into effect until Oct. 3, 1943. From then on the later time (by 30 minutes) lasted to the end of French’s tenure, and beyond.

Meanwhile, the rectory committee had been hard at work, checking through the rectory and identifying what needed to be repaired or replaced. Cost of improvements would be about $1,000, the committee reported. This caught the attention of all three congregations.

On March 30, 1943, the wardens of St. Anne’s, Trinity and Hosannas held a special meeting regarding the condition of the rectory. They decided to have the rectory put in good condition immediately. Work would include installation of a water pressure system, a new cesspool, furnace (secondhand if available), insulation in the attic, screen doors and windows, hardwood floors and linoleum in the kitchen. These jobs were contracted out to ensure best possible results.

Money for the improvements was borrowed from the diocese. Payments on the loan were divided equally among the three churches.

“In October, 1943, a reception was held in the rectory at Hyde Park, and many came to call and admire the improvements. Ladies of the Guild assisted at the tea.” (from The Story of St. Anne’s by Grace Bainard)

Changes in church services themselves also occurred during French’s incumbency. From the time of his arrival at St. Anne’s until the time he was priested (Sept. 1943), French was not eligible to celebrate Holy Communion. To fill the need, other priests were called upon to offer Eucharist about once a month. Often Durnford, but there were others, who made it possible for the congregation to receive the sacrament on a regular basis.

It is not clear when an altar guild was initiated. However, it was noted in Board of Management minutes on May 10, 1943, that “The Altar Guild is now functioning and made the preparation for Easter Communion.” In 1943, Easter Day was April 25.

Added to Sunday worship were services of Baptism, Confirmation, Marriage and Burial. At a special service, W.P. Simpson was invested as a Lay Reader.

During 1944, wartime concerns escalated in the parish. On June 6, Byron United Church and St. Anne’s Anglican held a combined “Invasion Service” at 8 p.m. The two denominations marked the original D-Day together with praise and prayer. The service took place at the United Church with Rev. L.C. Harvey and Rev. John French officiating. Subsequently, French introduced St. Anne’s to weeknight services of intercessions for the armed forces.

Just prior to this time, French had ended his study of theology at Huron College. His academic records show that he attended the college until May 19, 1944. He did not receive a theology degree from Huron.

Nevertheless, French continued to pour his time and energy into serving the three-point-parish. Reports at St. Anne’s next annual vestry meeting (January 29, 1945) disclosed that average church attendance had increased to 53 per Sunday and finances were in good shape with $418.70 left in the balance at the end of 1944. The women’s guild reported $451 receipts from fundraising efforts, and $331 disbursements with a balance of $120 plus a $50 victory bond, going forward. Sunday School attendance, of course, had risen as well. Not to be forgotten, the cemetery had been given a complete survey during this incumbency.

In February, 1945, French was granted a temporary leave of absence to become a chaplain in the Canadian Army. He conducted his last services in the three-point parish on Feb. 18. At a special gathering in the parish room, St. Anne’s bid him a fond farewell and presented him with a stole. French went overseas, was stationed in England, then in Germany after the war.

Upon his return to the Diocese of Huron in 1946, he was appointed to St. John’s Church, Tillsonburg and St. Stephen’s Church Culloden. The following year he transferred to the Episcopal Church Diocese of Michigan, where he continued to serve as a priest and was named a Canon there.

French did reappear, some years later, for a special occasion at St. Anne’s. On Oct. 5, 1956, he travelled to Byron from the U.S. to assist in the wedding service of Kathleen Hart and Nelson Ellis.

A grand and happy finale to his memorable connection with St. Anne’s.