This window given in memory of Harry and Marion Shore, depicts The Sower in beautiful colours.  The inscription is; "Whatsoever a man soweth that shall he also reap." 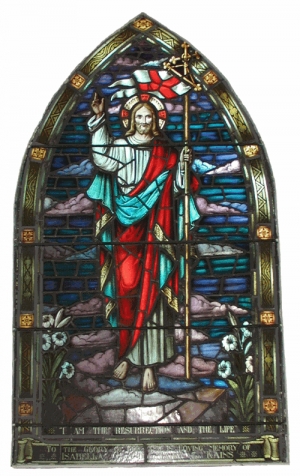 Isabella Gray Kains and Mary Zebby Kains
The window entitled "I Am The Resurrection And The Life" is situated in the Chancel area on the west side. It was given in memory of Isabella and Mary Kains. It shows Christ ascending with holes in his hands and feet.

The window "Suffer The Little Children To Come Unto Me" is situated on the west side of the church. It was installed 1966 in memory of the parents of Kathleen Hart Ellis and Frances Hart Waring.

Our great-grandmother, Mrs. Stephen Alger Hart, a widow, and her son, James, came from England in 1860 and settled on the north-west comer of Wonderland and Commissioners Road. From there, she walked to the little Anglican Church at Hall's Mills, which later became St. Anne's Church of Byron.

The Nativity window was donated by George Cotton in memory of his parents, William and Sarah. It shows Joseph, Mary and the baby Jesus with a sheep and cow looking on.